Antonio Franco founded the “Cantine Franco” winery in Valdobbiadene in 1919. Valdobbiadene is located at the foot of the Prealps, in the Venetian region, and is famous for the Prosecco vine and wine production. This winery is proud to be one of the oldest in Valdobbiadene, located in the town centre, not far away from the countryside and the vineyards.


The estate has been growing and evolving throughout three generations of producers. Antonio founded it, Nino expanded it and Primo improved the company performance throughout the years. 1982, when Primo took over its management, was the turning point.
Primo began to travel and to successfully export the wines in Europe as well as in America and the Far East. At the same time he invested in the production process in order to make higher quality wines. He began to monitor closely the grape cultivation with the aim of achieving high quality from the raw material level to the final product.


Primo Franco was one of the first pioneers to export the Prosecco and to introduce a different sparkling wine than Champagne into the international market. He has been successful, thanks to his open mind personality, his spontaneity, reliability and competence as well as his charm and ability to communicate his love for his job, and last but not least thanks to his high quality and delicious wines. 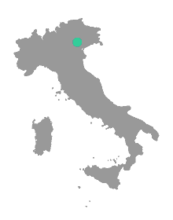