Varvaglione- One of the oldest and most awarded Southern Italian wineries.

Varvaglione Vigne e Vini is one of the oldest and most awarded southern Italian wineries. Working in the wine field since 1921, for three generations now, it is one of the most developing wineries in the Apulian region.

Based in Leporano, in the province of Taranto and within the territory known as Salento, experience and tradition have found their full synergy, combining the most innovative wine-making technology with the ancient wine traditions of the salentine territory.

The company focuses its attention on the varitey of local wines such as: Primitivo, Negroamaro, Malvasia and Aglianico from red grapes and Verdeca, Falanghina, Malvasia & Fiano from white grapes. In 2011,  Varvaglione Vigne e Vini celebrated its 90th birthday by launching a prestigious wine called ‘Papale’. Currently, Vigne e Vine is present in over 36 countries around the world. 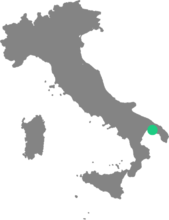